Hot on the heels of their critically acclaimed Leviaxxis demo, released earlier this year by W.T.C. PRODUCTIONS, fast-rising German black metal Band DYSANGELIUM unleash their debut album, Thánatos Áskēsis.As prefaced by Leviaxxis, the sound of Thánatos Áskēsis  can rightfully be described as tyrannical: swift and strategic, roiling and rumbling, surging and striking, DYSANGELIUM exude a startling confidence and authority beyond their young years as a band. The nine songs here righteously uphold the banner of orthodox black metal, but the Teutonic quintet work in a dazzling array of dynamics and nuance, especially in the unique, authoritative throat of vocalist Sektarist 0: it's literally the mouth of HELL, and his bandmates follow suit with incendiary performances and muscular execution. Even the song titles - among them, "Gateways to Necromancy," "I Am the Witness, I Am the Servant," and "Words Like Flames" - back up these claims.

1.Consecrated By Light
2.Words Like Flames
3.Obelisk Of The Sevencrowned Son
4.Chaomega
5.Aries
6.Gateways To Necromancy
7.Murmura
8.Ave Obscuritas Incarna
9.I Am The Witness, I Am The Servant 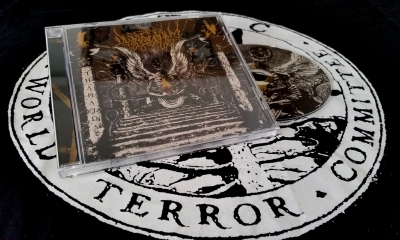 Ondskapt - Slave Under His Immortal Will - MCD

Behexen - By the Blessing of Satan - CD