"At long last! The Foul Hymns of the Adversary are ready to be unleashed! Dissonant and chaotic Black Metal merged with suffocating Dark Ambient landscapes. "To Anabainon ek tes Abyssu" is a blood-stained monument to death and disharmony. Psalms of the Lord, sung through the mouth of the Beast. Delirious visions from the beyond through the eyes of a leper. Oh, Lord! Lead us now into ruin! Lead us into the glorious radiance of Perdition's light!

The album was recorded in 2008 at a local studio, mixed at Flatline Audio and supposed to be released the same year, but due to the original label's demise it didn't happen. Now, after several years of delays, it is finally time for "To Anabainon ek tes Abyssu" to be released!" (DWP)

1. Cup of Babylon
2. The Poison of Manasseh
3. The Pit of Sheh-ohl
4. Feverwind
5. Shepherd of Perdition 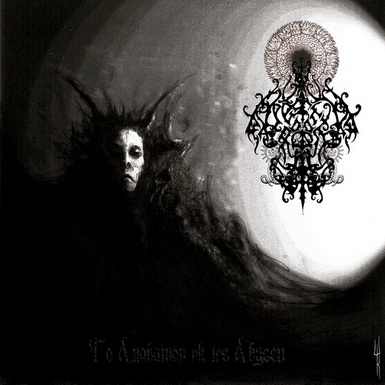