Although it's been five seemingly long years since DYSANGELIUM's critically acclaimed debut album for W.T.C., Thánatos Áskēsis, this Teutonic cult have not been sitting idly by; rather, they've been patiently biding their time to unleash their grandest strike yet. Of course, they released a split 7" with fellow German comrades Ain in 2015 and have also become a deadly force on the live front, but for many, the reverberations of Thánatos Áskēsis are still being felt today. There, DYSANGELIUM could be rightfully described as tyrannical: swift and strategic, roiling and rumbling, surging and striking, so startling was the quintet's confidence and authority beyond their young years as a band.

At last, DYSANGELIUM eclipse that no-less-considerable monument with their sophomore full-length, Death Leading. Ever aptly titled, here marks bolder strides within an already iron-clad style of black metal. One could call it the oft-loaded "maturity" or simply the fires of youth burning ground into wisdom, but the DYSANGELIUM of Death Leading strive beyond the by-now-commonplace tropes of orthodox black metal. Lurking and lunging, the seven central songs comprising Death Leading take tension and terror and turn them inside out, dragging the enthralled listener along their rollercoaster of stark austerity. The album's 41 minutes verily encompass the totality of experience, all under the banner of proud-and-pure black metal.

But make no mistake that this is indeed the same band who brazenly blazed the orthodox trail with Thánatos Áskēsis; more accurately, DYSANGELIUM's manner of expression has deepened and developed into one that's even more dynamic and dramatic and even a bit world-eating, such is the muscularity of their black metal and their nuanced confidence in flexing those muscles. Perhaps it's attributable to their growing stature as a live band, or perhaps it's down to an enforced hiatus before spreading bigger and black wings. But either way, Death Leading is anything but dead: it's positively/negatively alive and LIVE. Still at the fore are those addictingly majestic melodies, but now wrapped in a drier, totally analogue style of production that some could qualify as "rocking." Also still at the fore is the unique, authoritative throat of vocalist Sektarist 0...the literal mouth of HELL has opened even wider and issues forth doomed 'n' ruinous proclamations.

Hark! Heed those words, and prepare to follow DYSANGELIUM with Death Leading - to the very end. 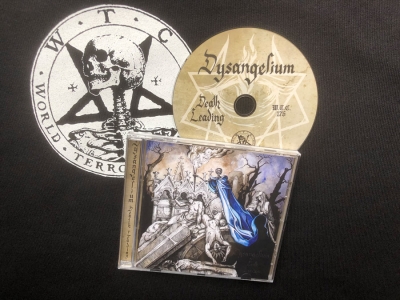