STRIGES are across-continental cult led by the insanely prolific Shatraug (HORNA, SARGEIST et. al.). As expected from such an ancient soul, STRIGES was brewed deep in the underground, honoring the old ways of cassette demos, the first arriving in 2007 and then another in 2013. Silence abounded, mystique built....until now, at last, STRIGES reveal their long-awaited debut album.

Bearing the title Verum Veterum, STRIGES' first full-length marks a glorious new epoch for the band, with Shatraug joined by vocalist Vaedis (Hellgoat/Vimur) and drummer LRH (HORNA, TROLLHEIMS GROTT). Dispensing with the (intentionally) raw recording of their demos, here do the trio find a production most suiting to their surging 'n' spectral ruminations. Indeed, Verum Veterum is all-caps BLACK METAL of a most '90s vintage - spiraling in its melodicism, the songwriting relatively direct yet detouring, a never-belabored shroud of mysticism covering it all - but nonetheless retains a freshness of approach that's palatably modern. This largely comes down to the ever-present physicality STRIGES exude here; despite being a studio project spanning a great distance, their debut album remains robust in execution and richly analog in its recording. And while it's tempting to compare this to Shatraug's central creative vehicles, the pulsing 'n' possession-inducing drums of LRH put this on another level altogether, creating a delirium that's devilishly driven home by Vaedis' frighteningly annunciated vocals.

Black steel forged in the hour of chaos, STRIGES make their timely return with Verum Veterum. Will a return to the crypt ensue upon its arrival? Only Shatraug t truly knows, but we are blessed/cursed to witness his visions in the meantime. 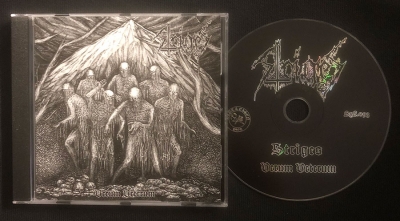 Godkiller - We Are The Black Knights - Digipak CD