Once thought long dead, existing as they did during the ancient days of the early ’90s, Baxaxaxa publicly arose from the dead in 2018 with an exclusive performance at the esteemed Destroying Texas Fest and then a gig in their native Germany. Feeling scorn for nowadays black metal and wishing to stir the cauldron of yore, the then-quintet quickly recorded The Old Evil EP and released it on cassette tape in October 2019. Buoyed by that burning-black momentum, Baxaxaxa released another EP, Devoted to HIM, little more than a year later. Both recordings’ respective titles should surely bespeak the black metal to which the band is beholden: rotten, primitive, and ancient, out of touch and most definitely out of time.

And yet, time itself is a curious thing, because at long last, nearly 30 years after their original formation, Baxaxaxa release their debut album: Catacomb Cult. Exquisitely OLD and proudly so, Catacomb Cult is everything a Baxaxaxa full-length should be: patiently hammering, ghoulishly atmospheric, and reeking of sulfur. But for as much as the album sounds like quintessential Baxaxaxa, the band prove they’re not without surprises or at least subtle developments in their ever-uncompromising sound. For one, the production’s clear and cutting, revealing every haunting nuance without sacrificing a whit of grit. For another, the songwriting across Catacomb Cult no doubt whips forth a fury at times, but equally so does it display a more doomed-out gait that gives depth and dynamics – and yes, a truly catacombed feel. Same, too, for their characteristically medieval synths, tastefully applied and lingering like funeral fog. 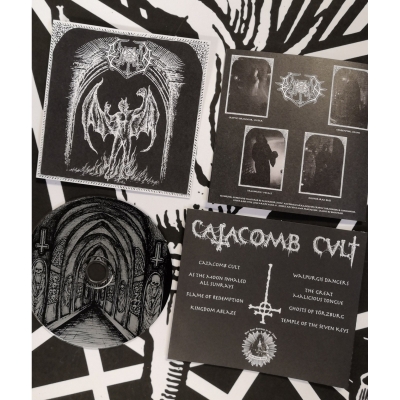