W.T.C. PRODUCTIONS is proud to present INFERNO's highly anticipated seventh album, Gnosis Kardias (Of Transcension and Involution). A work of almost impossible magnitude, INFERNO's latest long-player sees this long-running Czech cult go from strength to strength, daring to dream beyond black metal whilst finding its innermost core, resulting in an opus which both scales feverish heights and plumbs fathomless depths - simultaneously. Simply, it is a work of both boundless beauty and even-more-boundless darkness.

Since the band's conception in 1995, the musical and lyrical aspects of INFERNO have been guided by inner impulses that not many were able to comprehend. Now, after more than 20 years of existence, its members are endowed with such knowledge, experience, and skill that finally allow them to effectively portray the pervading greatness of powers from beyond and within. The heights of the spiritual ecstasy and abyssal depths of the unconscious were the main inspiration from which the musical tones and words came forth.

INFERNO's seventh full-length to date, Gnosis Kardias (Of Transcension and Involution) picks up the threads of the crucial previous recording Omniabsence Filled by His Greatness, presenting five new songs and one which concludes and opens the album at the same time. The band made a single step backwards to evaluate and explore the essence responsible for the previous opus in order to create an even stronger and more refined album.

Musically, one can expect a natural fusion of genuine black metal and deeply-felt psychedelia. The new songs further explore the pathways presented by Omniabsence Filled by His Greatness, but there are compositions and ideas which could not have been heard before. The scorching aggression and mesmeric calm, darkness and light, straightforwardness and progressive tendencies - all are merged into a single magical whole. Lyrics and music will open many spiritual paths, some leading towards damnation, and others that lead to the long-desired dissolution in the absolute. But some also offer a glimpse into the core of the eternal tragedy, the breaking on the wheel of existence and rebirth, to which all who refuse to open their hearts are condemned.

The voice of ACHERONTAS mainman Acherontas V. Priest contributed to the fractal vision of the new album, and Tore Stjerna once again supervised the recording. The visual side of the album was entrusted to Peruvian master Jose Gabriel Alegría Sabogal. However, as one can expect from a true work of art, Gnosis Kardias (Of Transcension and Involution) will go beyond a mere sensory experience. How far do YOU dare to go? 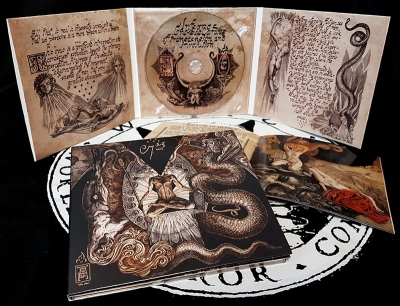