Hailing from Chile, HADES ARCHER are staunchly and proudly a duo: foul and filthy, yet fuller than most bands twice their membership. Across their prolific canon, HADES ARCHER have come to define - and set the gold standard for - modern black/death metal hailing from South America. Rabid fans for many years, HELLS HEADBANGERS couldn't be more pleased to work with the diabolical duo for Temple of the Impure and other upcoming assaults.
HADES ARCHER was formed in 2006 in Santiago, Chile by N-III on guitars and voice and Infernal Desolator on drums. The band launched their first demo-rehearsals through Chilean label Kuravilu, unleashing their glorious influences such as Venom, Bathory, Hellhammer, Sarcofago, Sextrash, Mayhem, Impaled Nazarene, Bestial Warlust, Black Witchery, Inquisition, and more. Later in 2007, Hateaxes Command came in on drums. With this new lineup, the duo recorded the Penis MetalGloria Rex Infernvs EPs- released in 2008 and 2010, respectively - and their debut album, 2011's For The Diabolical Ages. This cult era is considered by HADES ARCHER where the band's history truly began.
In 2012, Hateaxes Command departed and was replaced by Skullcrusher Hammers, due to N-III's move to Valdivia years before. With this lineup, HADES ARCHER launched a number of live rituals and recorded the mini-album The Curse Over Mankind. Two years later came the Circus of Abominations split mini-album with new label mates SLAUGHTBBATH. Once more due to Skullcrusher Hammers moving to another city and foregoing HADES ARCHER embarking upon future tours, the year 2015 saw the return of Hateaxes Command to record the EP Unus Cantus Bestiae, which was later reissued as a split with Japan's legendary Sabbat.
But, at long last, now arrives Temple of the Impure: the grand culmination of HADES ARCHER's hard graft in the underground the past decade-plus, and a grimy new jewel in the reigning crown of Chilean black/death. The band's first new recordings in two years, Temple of the Impure proves that the silence was indeed golden, for LP#2 is a fucking firestorm of filth and foulness, a forever-flowing fount of unnervingly hypnotic ultra violence. Both defining and deviating from the classic Chilean archetype, Temple of the Impure sees HADES ARCHER simultaneously surpassing the boundaries of chaotic overload and somehow delivering their most diseased and dirt-encrusted expression by paradoxically locating their cleanest and most professional recording to date. A dicey move in most bands' hands, but here, the payoff speaks for itself: Temple of the Impure is precisely THAT, and it can be heard in gleamingly 3D tones, thereby maximizing the palpably physical possession it invokes within the listener. Total and utter diabolism across a dozen tracks in 34 minutes, Temple of the Impure kicks in immediately and thoroughly assaults the senses for its entire duration, along the way finessing forth deft 'n' dynamic downshifts and martial headbanging moments.
Aptly titled as anything currently out there, Temple of the Impure is the foundation on which HADES ARCHER hereby assert their dominance across the nowadays underground metal scene. Behold mastery, and bow down. 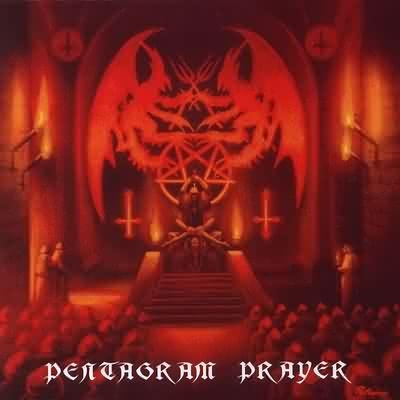