Active since 2009, Shibalba bring their first full ritual expression to the halls of Malignant. Samsara summons five chthonic explorations using all the hallmark instrumentation of the genre to great effect; liturgical chants and spectral vocal incantations, minor keyboard orchestrations, resonant chimes and prayer bowls, ceremonial percussion, and atmospheric drift ensconced in sepulchral reverb. It’s a tapestry of richly detailed and layered sounds that emanate from candlelit chambers and underground passages, and an intoxicating and majestic homage to the darkest of arts. Previous work must be noted and recognized, but it is with Samsara that Shibalba’s vision is fully realized. And while the shadow of Endvra, Funerary Call, and Halo Manash loom in the background, Shibalba have forged a new path and solidified themselves among the leaders of the new realm. We have entered the Halls of Inner Sadhana to re-unite Pilgrimage and Austerity, to gaze once more behind the Eyes of Samadhi, and to reach new starfields of alienation. (Description by Malignant Records)

We proudly present the vinyl version of Shibalba's debut full length album, Samsara, which was released on CD in December 2015, by Malignant Records.

The LP is limited to 300 copies and comes with a printed innersleeve and heavy vinyl. 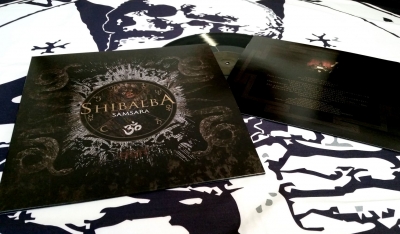